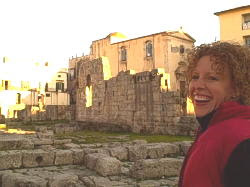 PLACES VISITED: Palermo (the catacombs), Taoromina (Greek Amphitheater that Palvorati and others have sang in; gorgeous beauty!), Sigonella (military base), Mineo, Etc.

*Syracusa Conference: My greatest blessing on that trip was getting to watch God teach me what needed to be said (to feel prepared was an added blessing- like fresh water to my heart.) I watched God work and continue to lay things on people’s hearts…to hunger more for Him…even till the day I flew out! It was held at this gorgeous hotel in Syracusa Sicily where Paul landed in Acts! There was cobblestone and even uncovered Jewish baths in the hotel under glass floors that made you feel like you were walking on nothing and about to fall…just don’t look down. I spoke on the FREEDOM of being nothing before the Great Almighty – I wish you could have seen the eagerness and tenderness of the women…even as they spoke to me long after we had ended and they talked to me before heading to their cars….47 women…Huge turnout for Sicily…The women just came pouring in!

*Staying with close friends. I had no idea that I would get to do so, but God had me stay with some friends…I fell asleep crying while writing in my journal. Another two days was spent listening as God took one girl through a journey of her life (how often do we get that opportunity?) so that she could see where she really stood… God, continue your work! The effects of Catholicism are harsh here…There was one woman who came up to me in tears asking me (because she thought God would hear my prayers) to pray for her estranged brother. The fervency in her voice was like I was her last hope. I explained to her that I had no more right to come to God than her, shared the gospel, and then when finished – somehow that must have been all God wanted me to say- I was rushed away by others…pray that God will grow that seed!

*SPOKE to the Youth – I’ve never had a youth leader have the youth introduce themselves instead of introducing me to them – Can we make this the habit instead? It was powerful and then God was very clear on what I was to tell them. Afterwards they encircled me…so hungry!

*SANG/SHARED: As is usual – they took me to the different services in the area on Sunday morning – Seriously, the two new Chaplains are SO hungry for the WORD…one of them and their children have memorized books of the Bible! I was so moved, I wanted to just be on my knees through the service as God was made the focal point throughout it. Then at the other service, the Chaplain had been in Chaplain school with my brother Jonathan – Crazy! I was able to talk to one of the greatest pianists in Sicily about the LORD….He’s been so faithful to serve with the Americans there. There are many other personal stories, but for confidentiality sake….I’ll let them share with you in Heaven. J Most whom I spoke to were serving for America…also, Italian, Sicilian, former Muslim believers.

Rarely do I get to know the people I speak to in one on one settings beyond the conference like I had the opportunity to this tour. When my luggage didn’t arrive, they bought me clothes. I was able to serve them in making dinners, etc. But, more than anything I could give them, they shared themselves and lessons God had for me to hear…what more could I ask for? Sicily was a busy time of completely being and by the time I left it felt like home. I can’t wait till I get to see the family there again.